News > ZooNation’s Some Like It Hip Hop which comes to Mayflower Theatre next week on 15 & 16 October! 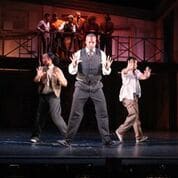 ZooNation: The Kate Prince Company bring back hit show ‘Some Like It Hip Hop’

Theatre fans will be delighted to know, after nearly 8 years ZooNation: The Kate Prince Company is finally bringing back its smash hit show Some Like It Hip Hop this Autumn, coming to Mayflower Theatre on 15 and 16 October. This show thrilled audiences and critics when it opened in 2011, prompting an Olivier Award nomination, five-star reviews and standing ovations with its infectious “wit, heart and magnificent energy” (The Independent).

With a nod to Billy Wilder’s Some Like It Hot and Shakespeare’s Twelfth Night, it tells a comical tale of love, mistaken identity and revolution, as two women take on a male-dominated world by disguising themselves as men.

Touching on themes of literacy, sexism and tyranny, ‘Some Like It Hip Hop’ is a story of love, mistaken identity and revolution in a city where books are banned and women are kept subservient to men. The story revolves around two central female characters, Jo-Jo and Kerri. When they are discovered breaking the rules of the city, they are thrown out! They decide they have only one option – to return to the city dressed as men. It doesn’t take long for the two women to prove their worth, and it also doesn’t take long for Jo-Jo to fall in love with Simeon, the only educated man in the city. If only she wasn’t wearing a moustache…