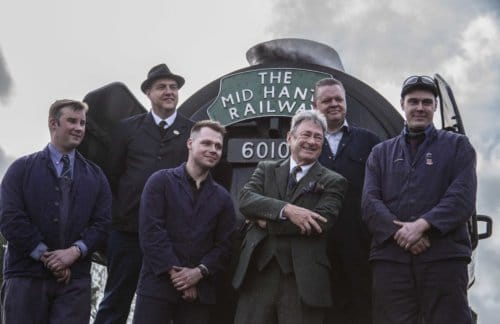 The Watercress Line was buzzing with excitement and anticipation yesterday as guests awaited the arrival of the record-breaking Flying Scotsman into Alresford Station to kick off her three week visit at Mid Hants Railway ‘Watercress Line’, and mark the reopening of Alton Station following the Whitedown Lane bridge restoration work.

This most famous of steam locomotives in the world, is visiting the heritage railway for the first time from 14 February to 8 March, allowing visitors to not only travel behind her, but also take advantage of additional experiences on offer to see the 97-tonne A3 class locomotive during her stay.

Watercress Line Director Simon Baggott said: “It’s been a long time in the planning but we are delighted to welcome Flying Scotsman to the Mid Hants Railway. It was a landmark moment as she travelled across the new Whitedown Lane bridge, surrounded by detonators and 300 local school children waving flags before arriving into Alton Station and breaking a banner to officially reopen the line.

“We are grateful to the National Railway Museum for giving us the opportunity to run such a unique and historic event to operate and display such a famous locomotive.”

Valentine’s Day saw Flying Scotsman thrill passengers with three journeys through the day and a special dining experience in the evening allowing guests to have the opportunity to see her up close as well as travel behind her.

Costing £7,944 to build and completed in 1923 by the London and North Eastern Railway (LNER), Flying Scotsman was named after the prestigious London to Edinburgh express train service which the locomotive helped to operate with a journey time of eight hours.  In 1924, Flying Scotsman appeared at the British Empire Exhibition in London, in 1934 she became the first locomotive to reach 100mph and in 1963, British Railways withdrew the locomotive from service.

Purchased by the National Railway Museum in 2004, Flying Scotsman was restored thanks to a £4.2 million, ten year project funded by the National Heritage Memorial Fund and the Heritage Lottery Fund as well as from public donations.

Tickets to ride behind Flying Scotsman sold out rapidly, however there are tickets remaining to travel over the Watercress Line and see Flying Scotsman up close over the next three weeks, for further information and to book, please visit www.watercressline.co.uk/flyingscotsman