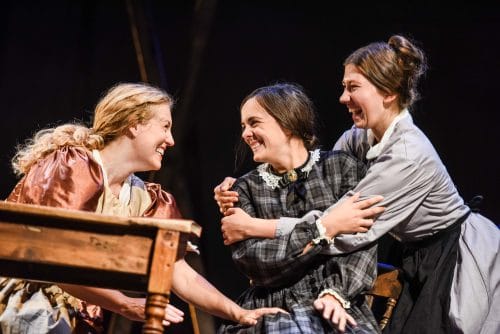 Blackeyed Theatre’s productions of Jane Eyre and The Strange Case of Dr Jekyll and Mr Hyde are now available to watch On Demand from the comfort of your home on your phone, tablet, desktop, laptop, or smart TV via Theatre Royal Winchester’s website.

Blackeyed Theatre’s revival of Charlotte Bronte’s Jane Eyre, was scheduled to appear on the stage at Theatre Royal Winchester in March 2020 but was cancelled due to the Covid pandemic. However, the company was able to perform the show in the autumn in Bracknell and took the opportunity to record a performance that is now available to watch On Demand.  Jane Eyre tells the thrilling story of an orphan girl and her journey from a childhood of loneliness and cruelty to a life at Thornfield Hall and an unlikely relationship with the mysterious Mr Rochester. Captivating, brooding, and intensely powerful, Jane Eyre is a moving and unforgettable portrayal of one woman’s quest for equality and freedom, and lives as one of the great triumphs of storytelling.

Blackeyed Theatre’s thrilling adaptation of Robert Louis Stevenson’s dark psychological fantasy The Strange Case of Dr Jekyll and Mr Hyde immerses the audience in the myth and mystery of 19th century London’s fog-bound streets where love, betrayal and murder lurk at every chilling twist and turn. Telling the story of Doctor Henry Jekyll who is a good man, successful within his field and respected by his peers. He’s close to a neurological discovery that will change the face of medical science forever. However, his methods are less than ethical, and when a close friend and colleague threatens to expose and destroy his work, Jeykll is forced to experience on himself, whereupon something goes very wrong… or very right. And suddenly Jekyll has a new friend – the brutal Edward Hyde.

Jane Eyre and The Strange Case of Dr Jekyll and Mr Hyde are available to On Demand for £10 per device, rental for 72 hours. Age guidance for both productions is 11+. For more information and to book tickets, visit theatreroyalwinchester.co.uk.