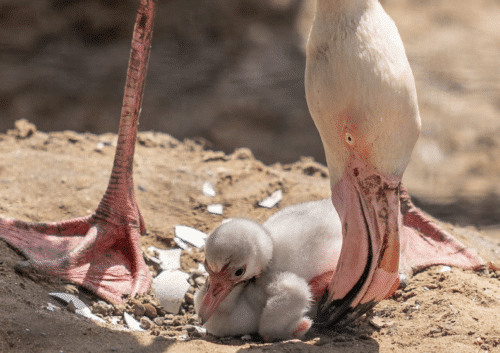 There’s a new fluffy addition to the Greater Flamingo family at Marwell Zoo in Hampshire. A little chick hatched this week and has been caught on camera on its very first day in the world.

It’s been over four years since the zoo had a Greater Flamingo chick successfully reared. The animal team has been working hard to encourage the birds to nest by adjusting a few husbandry techniques this year. Keepers constructed some artificial nests earlier in the year to encourage the birds to build their own, and a new soil and sand ratio mix was added to make it easier for the flamingos to build the nests. With the recent heat, the bird team have also been using a sprinkler system twice a day to help the nests retain their shape and not crumble.

Ross Brown, Animal Collection Manager at Marwell Zoo, said: “We’ve had 12 eggs this year, however fertility levels are notoriously unpredictable in Greater Flamingos, so as the saying goes, we’re not counting our flamingos until they’ve hatched! However, we are hopeful we should see some more chicks in the coming weeks, so watch this space.”

When Greater Flamingo chicks first hatch, they have pale grey down, which is soon replaced by a second, darker coat of down. Flamingos feed their chicks with ‘flamingo milk’ which is produced in their crop. This milk is similar to mammal milk but is produced by both male and female flamingos.

For more information, or to adopt a Greater Flamingo, visit www.marwell.org.uk.