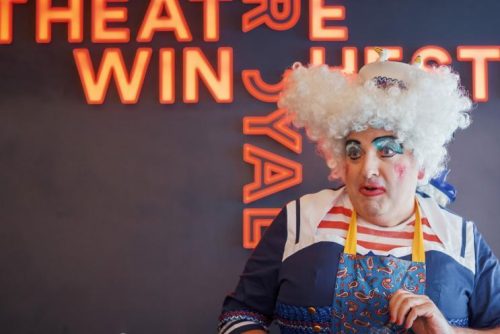 Theatre Royal Winchester has today confirmed that their Christmas show, Four Dames in Search of a Panto, will go ahead as planned, showing from Saturday 5 December 2020 to Sunday 3 January 2021 as the city is placed in Tier 2 restrictions.

Four Dames in Search of a Panto will feature panto set pieces, hilarious gags (plus some very corny ones too!), original songs and familiar faces to Winchester audiences. The socially distanced show is being created by the same team behind the theatre’s hugely successful pantomimes – Written and directed by James Barry with music by composer Simon Slater.

The cast of this panto-styled show have all previously starred in the theatre’s pantomimes. Julian Eardley returns as one of the Dames – his 11th outing as a Dame in the city. Julian is joined by his comic side-kick from the last three pantomimes– Ed Thorpe. Last year Ed played the title role in Dick Whittington, as well as Wally in Beauty and the Beast and Smee in Peter Pan – for which he was nominated in the national Great British Pantomime Awards in the Best Songsheet category.

Libby Gore, who played Fairy Bow Belles in last year’s pantomime, will play the third Dame. The fourth Dame will be played by Tom Attwood. For the last three years Tom has been the resident Musical Director playing the keyboard for the pantomimes – but this year Tom is stepping on to the stage to play the fourth Dame! Tom’s first performance on Theatre Royal Winchester’s stage was in Spot’s Birthday Party in 2002 – he’ll be playing the same accordion this Christmas as he did 18 years ago!

The theatre has put in measures to make the venue Covid secure and have been granted use of UK Theatre’s See It Safely mark that certifies venues are complying with the latest Government and industry Covid-19 guidelines to ensure the safety of staff and audiences. Measures in place include the removal of every other row of seats in the auditorium and leaving two empty seats in between each ‘audience bubble’. Face masks must be worn in the auditorium by everyone over 11 years unless the customer is exempt. Hand sanitizer stations are in place throughout the building, a one-way system is in place and the venue has increased its cleaning routine throughout and regular disinfects the auditorium, foyer and toilet areas.

Four Dames in Search of a Panto will run from Saturday 5 December 2020 – Sunday 03 January 2021. Tickets are on sale now. There are relaxed; British Sign Language; and audio described shows also scheduled. The theatre has also announced that it will be live screening a number of the performances as well, which can be enjoyed from the comfort of your own home.

For more information and to book tickets, visit theatreroyalwinchester.co.uk or email [email protected]