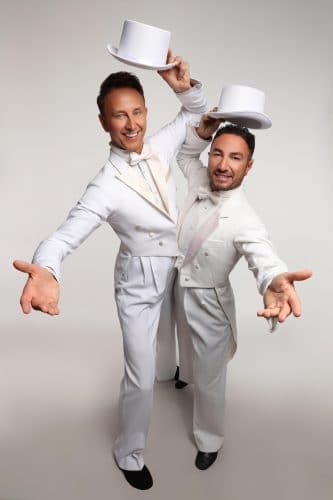 Ian and Vincent have both been part of the hit BBC show for a number of years, their partners have included Zoe Ball, Penny Lancaster, Rachel Stevens, and Louisa Lytton. Ian, until the most recent series had also presented the spin off show – It Takes Two with Zoe Ball.

Act 2 – The Ballroom Boys follows the success of their previous five-star tour – which came about after the pair decided they wanted to bring to the stage something ‘completely different’ to the tours featuring their Strictly peers.

The performance features old fashioned variety, dance, comedy and song – with beautiful costumes, lighting and world class routines, including the Viennese Waltz, the Foxtrot, the Rhumba and of course an incredible Argentine Tango by the master Simone!

Ian Waite and Vincent Simone’s Act 2 – The Ballroom Boys will be at Theatre Royal Winchester on Sunday 21 November at 2.30pm. For more information or to book tickets visit theatreroyalwinchester.co.uk or call 01962 840 440.