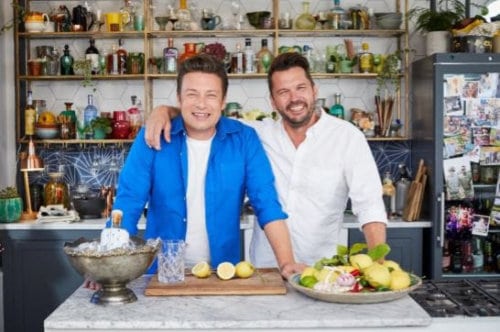 Hampshire’s market town of Alresford will be watched by millions on Friday 17 January as two of its thriving businesses appear on the popular show Jamie & Jimmy’s Friday Night Feast.

The ‘watercress’ episode sees chef, Jamie Oliver and celebrity farmer and industry ambassador, Jimmy Doughty visit The Watercress Company at its Drayton Farm and Mid Hants Railway’s Watercress Line. A new focus for the series is to get both Jamie and Jimmy out and about getting ‘hands-on’ while visiting the nation’s best food businesses. Jamie and Jimmy met The Watercress Company’s James Harper at Drayton Farm near Alresford, where the foodie friends were keen to learn about the health benefits of watercress but also take part in some of the more strange and unique processes employed by watercress growers.

Whilst in Alresford, Jamie and Jimmy also visit the Watercress Line in recognition of its past vital role carrying tonnes of watercress from the Hampshire countryside to the fresh markets of London in its Victorian heyday. The episode sees Jamie cooking in Alresford station’s West Country Buffet and Jimmy was delighted to have the opportunity to ride on a steam
locomotive too.

Kat Thomas, Events Manager at Watercress Line said: “We were delighted to welcome Jamie and Jimmy to Alresford station and bring the heritage of the watercress links to the railway, into the show.” The Watercress Company’s James Harper said: “Jamie and Jimmy were great fun. They were really interested in the health benefits we discussed and were fascinated by the unusual processes associated with growing watercress, happy to give anything a go, and of
course, Jamie obliges with a recipe demo alongside the beds, ensuring the freshest watercress is used.

The Watercress Company which supplies Tesco, M&S, Waitrose and Asda with fresh watercress and grows 1.2 million kilos of the superfood each year anticipates a boost in sales once the programme airs. The episode talks about how nutritious watercress is, but Jamie also demonstrates the versatility of watercress and how it can be used in the fight against food waste by helping to liven up recipes and perhaps using other ingredients left over in the fridge.

To see how Jamie and Jimmy get on down on the farm, tune into Channel 4 at 8pm on Friday 17 January.