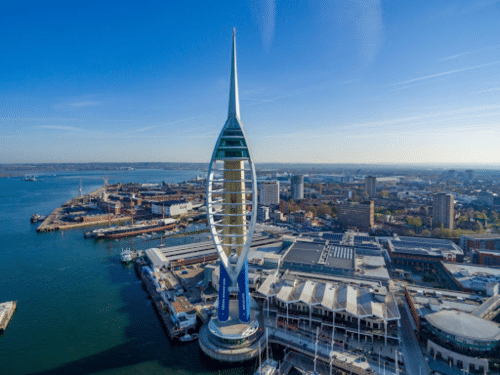 Emirates Spinnaker Tower celebrates a landmark anniversary this Sunday (18th October 2020) as it embarks on its 15th year of welcoming visitors to the inspired architectural centrepiece for the City.

This year, the challenging landscape forced Spinnaker to close its doors for a significant period, the first time in the building’s history, but reopened with renewed vigour back in July seeing a surge in popularity thanks to the British staycation boom.

With something on the horizon to now look forward to, Tony Sammut, General Manager at Spinnaker Tower comments:

“It has been a pleasure to manage the Emirates Spinnaker Tower for the last 4 years, as it reaches its 15th anniversary. We have an incredible team who strive to deliver the best in customer service across the range of unique experiences available at the Tower. Above all, we are proud to be hailed as the icon for the greatest city, Portsmouth.”

The world class tourist attraction opened in 2005 as part of the Renaissance of the Portsmouth Harbour Project and, to date, has welcomed over 4.1 million visitors. Built on the old HMS Vernon site, it was thanks to the support of 60% of the Portsmouth residents back in February 1998 the reflective maritime commission was approved.

Building work commenced in November 2001, taking just shy of 4 years to complete and the Tower opened its door to guests for the first time on 18th October 2005. Standing proud on Portsmouth’s harbourfront, the striking sail design which pays tribute to the naval heritage of the region, has firmly cemented its place in the City’s skyline ever since.