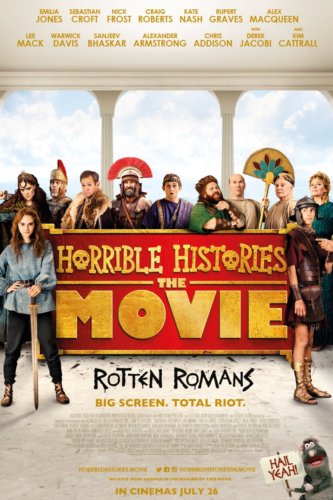 This Friday Horrible Histories: The Movie – Rotten Romans is released and cinema goers may spot some familiar local scenes in the film. Butser Ancient Farm, an experimental archaeological site near Petersfield, was backdrop to much of the drama.  The Roman Villa, Iron Age roundhouses and even the farm’s sheep and goats all took on starring roles!

This is the latest in a long line of on-screen moments for the farm over its almost 50 year history. From Dr Who to Gladiatress, and frequent documentary appearances, the farm is no stranger to the big screen.

Over two weeks in the autumn of 2018, Butser Ancient Farm was home to fog machines, cranes, trailers, catering trucks and much more with acting, singing and dancing taking over the ancient buildings.

Horrible Histories: The Movie – Rotten Romans follows the story of teenage Atti, a reluctant Roman soldier, and Orla, a young Celt with dreams of becoming a warrior like Boudicca. Set against a backdrop of Celtic-inspired rebellion to Roman rule, will they forge a friendship or end up on opposite sides?

To see the location for yourself, the farm is currently open to visitors 7 days a week and has lots planned over the summer holidays. This weekend they will be celebrating the launch of the film with Roman re-enactment group Butser IX legion is residence in the Roman Villa. Take part in marching, archery, cooking, crafts and much more, to really feel as if you are stepping into the Horrible Histories film set yourself!