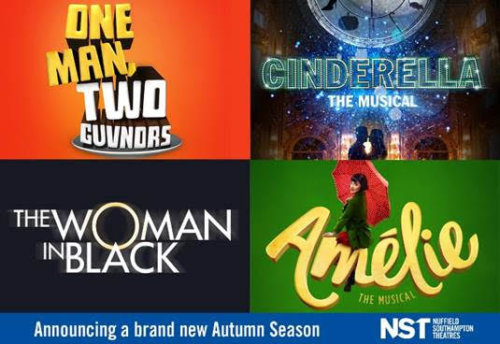 Top visiting theatre includes Friendsical, a new musical based on the cult comedy Friends, What’s in a Name? a comedy starring West End star Summer Strallen, new shows from Wardrobe Ensemble The Last of the Pelican Daughters and Frantic Assembly’s I Think We Are Alone.  NST also continues to host star comedian’s such as John Bishop, Daniel Sloss and Geoff Norcott and children’s theatre favourites The Gruffalo, Dear Zoo and The Tiger That Came to Tea.

“This Autumn and Winter season is all about bringing familiar and entertaining titles to Southampton with our trademark boldness. It is a season of incredible work, full of warmth and humour. One Man, Two Guvnors is one of the funniest shows of the last decade and our Pride and Prejudice (sort of) rips up the rule book!   We’re proud to be producing both. Other highlights include three new musicals in Amelie, Friendsical and our world premiere Cinderella The Musical, a heart warming musical family treat perfect for Christmas, as well as the hit play Barber Shop Chronicles by our very own Associate Artist, the poet and playwright Inua Ellams.”