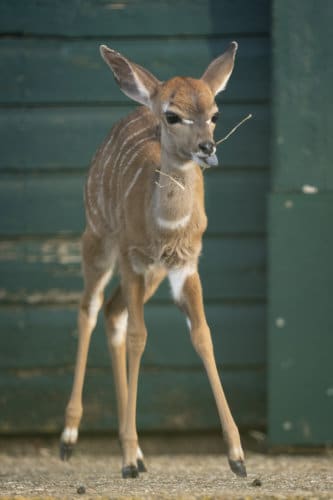 Marwell Zoo, in Hampshire, is celebrating a first (and second!) as the wildlife park welcomes two lesser kudu calves, a species previously never bred in the zoo.

First-time mums and calves are all doing well. Keepers have named the playful female calf Shaka, an African name held by the Zulu tribal leader in the early 19th century. The younger male, Kojo, is named after the African word meaning ‘born on Monday’, the day he was born.

Lesser kudu is a particularly nervous species, so the dam and calf are separated from the herd for the first few weeks after birth to remain undisturbed, as well as to allow the pair to develop a bond. However, both Shaka and Kojo can now be spotted playing together in a shared paddock with mountain bongo.

Marwell Zoo animal keeper, Lauren Arthy-Miles, said: “This is the first time we have bred Lesser Kudu at Marwell, so as well as contributing to the population of a species which is declining in the wild, it’s wonderful to successfully breed not just one but two healthy lesser kudu calves.”

Lauren continues: “Both calves are doing really well. It’s always a pleasure to have baby animals and having two is wonderful – not just in terms of breeding success, but the calves tend to “play” more when they are born at a similar time.”

Lesser kudu is a near threatened species of forest antelope found in the Somali-Masai Arid Zone in Ethiopia, Somalia, Kenya and Tanzania. This species favours areas with dense vegetation to give them cover and protection. Approximately a third of the Lesser kudu population can be found in protected areas such as National Parks.