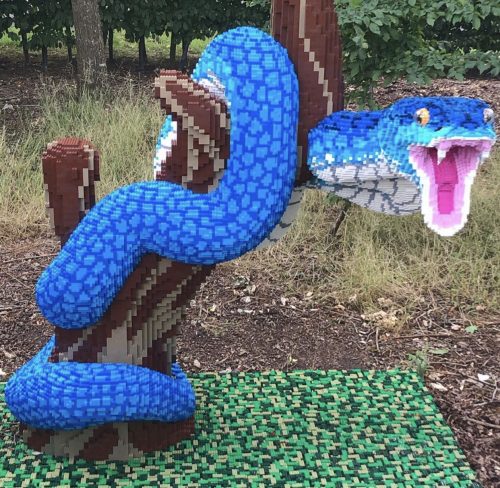 A fearsome new collection of animals have arrived in Hampshire as a world exclusive exhibition comes to Marwell Zoo.

The Hampshire zoo has today released a sneak peek of the unique collection of larger than life creatures made of toy bricks as they prepare to reopen their gates next week for the first time in three months.

SUPERSIZED! features up to 40 colourful models and is on display around the 140-acre park alongside the zoo’s hundreds of exotic and endangered species until 1 November 2020.

Professional toy brick builders said it took more than 10,000 hours and two million bricks to create the giant sculptures which have been magnified to enormous proportions.

Guests will enter the zoo through a ‘shrinking machine’ to start their journey around an educational trail which dispels the myths around these often misunderstood creatures.

From sneaky predators such as the fearless honey badger and venomous blue-ringed octopus to the aptly named assassin bug, all creatures have been chosen for their colourful appearance in nature and unusual natural abilities.

The peacock spider brick model is 208 times larger than the real creature, which is a teeny tiny 0.5 cm in actual size; smaller than a fingernail.

Highlights include a three metre tarantula, a towering two metre spitting cobra (who does actually spit!) and a stunning kingfisher.

Sean Mannie, Commercial Director at Marwell Zoo, said: “We cannot wait to open our gates again and welcome back our guests. The zoo just isn’t the same without the buzz of families connecting with nature and making memories together.

“This year’s SUPERSIZED! event is very impressive and it’s now on display until November. Our aim is of course to entertain, whilst also debunking prejudicial stereotypes, particularly given so many species become rare or under threat because they are misjudged and persecuted.”

Marwell Zoo will reopen on Monday 29 June with a host of new safety measures in place to protect its guests, staff and animals. As a special thank you, the first four days will be exclusively for its members ahead of its general opening on Friday 3 July. All guests will need to book online in advance.

SUPERSIZED! will be included with general admission. Zoo ticket prices cost from £18 per child (3-16 years) and £22 per adult, which include an optional donation. Children under three go free and every penny spent at Marwell helps the charity support the zoo and its conservation projects in the UK and overseas.

Marwell Zoo, home to more than 140 species, is owned by Marwell Wildlife, a global conservation charity leading programmes in the UK, Africa and across the world.

To find out about all the new safety measures in place at the zoo and to book, visit www.marwell.org.uk/guest-guidance