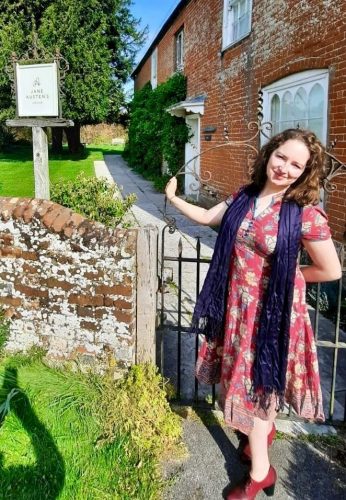 Jane Austen’s House in Chawton, Hampshire is delighted to announce the appointment of Lizzie Dunford as its new director. Starting her new position on 14 April 2020, Lizzie brings more than a decade of experience working in museums and historic houses to the role. Prior to joining Jane Austen’s House, she was the operations manager at Chiltern Open Air Museum and previously served in various conservation and management positions for organisations including the National Trust.

An early reading of Pride and Prejudice inspired Lizzie’s love and study of Austen’s work – and as the director at Jane Austen’s House, she will be responsible for overseeing the strategy and operations of the most cherished Jane Austen site in the world.

Her first week in the job has already seen Lizzie confronting the challenges of keeping the Museum running – even with its doors shut due to the COVID-19 crisis – and working with the team to help preserve the historic house and its collection.

Chair of the board of Trustees, Isabel Hughes, said: “Lizzie joins Jane Austen’s House at an unprecedented time in its history. She is already proving her strong leadership skills in working with the Trustees and helping to navigate the team through this difficult time. We are thrilled to have her on board and confident in her dedication to preserving Jane Austen’s House and its collection, and maintaining the whole site’s preeminence for Austen enthusiasts around the world.”

Lizzie Dunford said of her appointment: “Despite starting this new role during strange and uncertain times, it is a true privilege to lead the team at Jane Austen’s House through this current crisis and into the future.”

She continued by asking the public for any support they can provide: “As a registered charity without any regular public funding, Jane Austen’s House is entirely reliant on income from visitor admissions and purchases. Without this, we may not be able to maintain the House and its priceless collection while our doors are closed to the public. We know times are hard for everyone, but we would be hugely grateful for any support and are asking for the public to support our appeal and donate if they can. All donations will go towards ensuring that when the crisis is over we can re-open and continue to welcome visitors to this special place that played such a central role in Jane Austen’s life and the creation of her treasured works.”