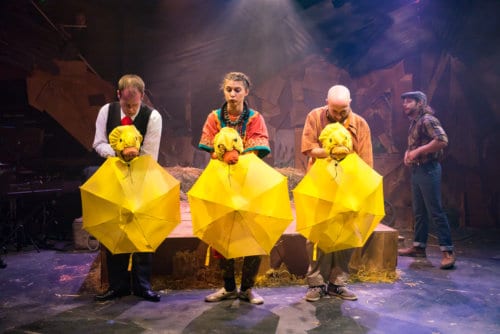 Honk! A Family Musical is the heart-warming retelling of Hans Christian Andersen’s well-known fable, The Ugly Duckling, which tells the story of a plucky little bird who gets picked on by the other farmyard animals for being different. When he is pushed out of his flock and goes on a journey he meets characters who teach him he is more than just his fowl looks.

Originally written by composer, George Stiles, and lyricist, Anthony Drewe – a multi-award winning British musical theatre writing partnership, whose scores include the smash-hit Cameron Mackintosh/Disney production of Mary Poppins – the show first performed in London’s West End in 1999, before it went on to win the 2000 Olivier Award for Best New Musical. Since then it has been translated in to many different languages and delighted millions around the world.

This family-friendly production of the show, brought to the stage by Hounslow Arts, tells the story with the help of puppets, magic, illusions and water guns.

Honk! A Family Musical will be at Theatre Royal Winchester on Friday 28 – Saturday 29 June. To find out more, or to book tickets, visit www.theatreroyalwinchester.co.uk, or call the Box Office on 01962 840 440.