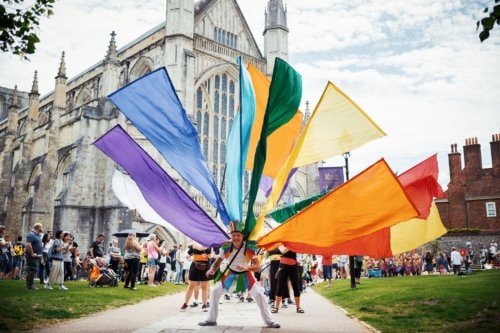 Hat Fair – the UK’s longest running festival of Outdoor Arts – celebrated 45 years this weekend (Friday 5 – Sunday 7 July), by filling the streets and green spaces of Winchester with vibrant, fun, intriguing performances from local to international street artists, dancers, musicians, theatre companies and circus acts – all being enjoyed by tens of thousands, of all ages.

The host city could not miss the start of the free, three-day event, organised by the charity Live Theatre Winchester Trust, which exploded on to the streets Friday lunchtime with the Hat Fair Carnival that saw hundreds of local school children – dressed in colourful costumes exploring themes including heritage and nature – singing and dancing from The Great Hall to Abbey Gardens. The Carnival was followed by the alluring Thingumajig Theatre’s Ghost Caribou – two giant illuminated caribou puppets – which returned later that day for the finale performance – a walkabout that saw them and hundreds of members of the public parading through the city centre to watch them perform a beautiful shadow puppet show in front of an awesome Cathedral backdrop. The Carnival was organised by Live Theatre Winchester Trust’s Engagement Producer, Kat Henderson, in collaboration with the New Carnival Company, and was the biggest and brightest – until next year!

Hat Fair gets its name from the tradition of hatting – or busking – collecting donations in a hat following a street artist’s performance; and audiences were treated to shows from ‘Hatters’ from the UK and beyond, including charming US dancer, Bboy illwill, Australian extreme hula hooper, Maple Staplegun, Belgium’s eccentric workman, Alessandro Carocci, The Strong Lady, and festival regulars, singing acrobats Barada Street and comedy duo Street Comedy – with many involving the public in their acts. One Hatter revealed this weekend’s event had been their best hatting experience ever, with many wanting to return next year.

The festival’s headline act, Motionhouses’s WILD, captivated almost 1,000 audience members each evening. This extraordinary dance-circus piece saw the troupe carrying out daring moves across a sky-high forest of poles, in front of a blazing sunset – after a bright and sunny day.

Then on Saturday while thousands enjoyed London Pride, LGBTQ+ rights were celebrated at Hat Fair by Tickertape Parade’s Fantabulosa – a colourful show of song, dance, storytelling, lip-sync and more, by drag performers, that taught children and adults how to love whoever they are, or desire. There was also the entertaining and informative Buck-A-Brenda – a Buckaroo style game that saw the audience hanging items related to disabilities on ‘Brenda’ in her tipping wheelchair. While Eye Music Trust’s brilliantly vibrant Colourscape – a labyrinth of colourful chambers filled with music and dance – had to be seen to be believed.

The host city was showcased with performances taking place in front of well-known landmarks such as The Guildhall, as well as playing the lead role in several Winchester-themed pop-up shows and walkabouts, including Katie Green’s The Imagination Museum: Wolvesey Castle, which saw three eccentric guides leading audiences on a tour-with-a-difference and the Natural Theatre Company’s Winchester Undone – an hilarious wandering performance that introduced the audience to some of the colourful characters of the city’s past!

Saturday also saw the return of the Top Hat Competition – a chance for past and present University of Winchester students to perform a show – the best voted for by the public – to win mentoring by Hat Fair Director, Andrew Loretto, and return to next year’s event as an official act. The winner will be announced shortly. While last year’s winner, Martin Jakeman, entertained audiences in St. John’s Almshouses with Home Fires – an immersive experience and pop-up shows inspired by stories from residents of the city during the Second World War. 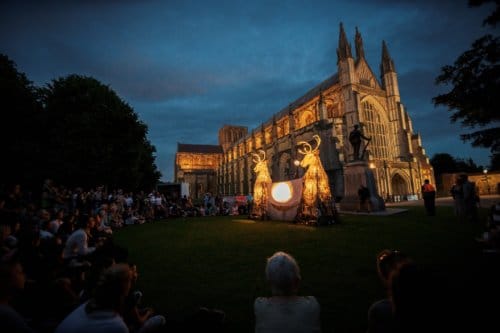 There was plenty of local talent on show over the weekend, including from Winchester-based theatre company Blue Apple, which supports performers with learning disabilities, The Bard Buskers, Out of Bounds Theatre, Magic Glen, Ange Takats, The Belgarum Jazz Band, Theatre Royal Winchester’s Youth Theatre performers, and keen singers got involved with Hat Fair’s Flashmob Choir who sprung up with Make Your Own Kind of Music.

On Sunday the festival moved to North Walls Recreation Ground for a more relaxed day, perfect for families and picnics. The space swelled with thousands who came out to enjoy further performances by the Hatters, as well local talent hosted by The People’s Stage. An escape room experience, mini golf, fun fair rides, and food and drink were also enjoyed.

He said: “Hat Fair 2019 was a joyous, sunny three days which brought the crowds out in their thousands to the streets, historic sites and green spaces of Winchester. The festival brought people of all ages together in a celebration of performance, art, life and internationalism. I am very proud of all of our artists and the incredibly hard working team that made it all happen.”

The Live Theatre Winchester Trust wishes to thank this year’s event, production and security teams, the sponsors and funders including Arts Council England, the city’s businesses and the weekend’s audiences for their generous donations, which help keep Hat Fair free.