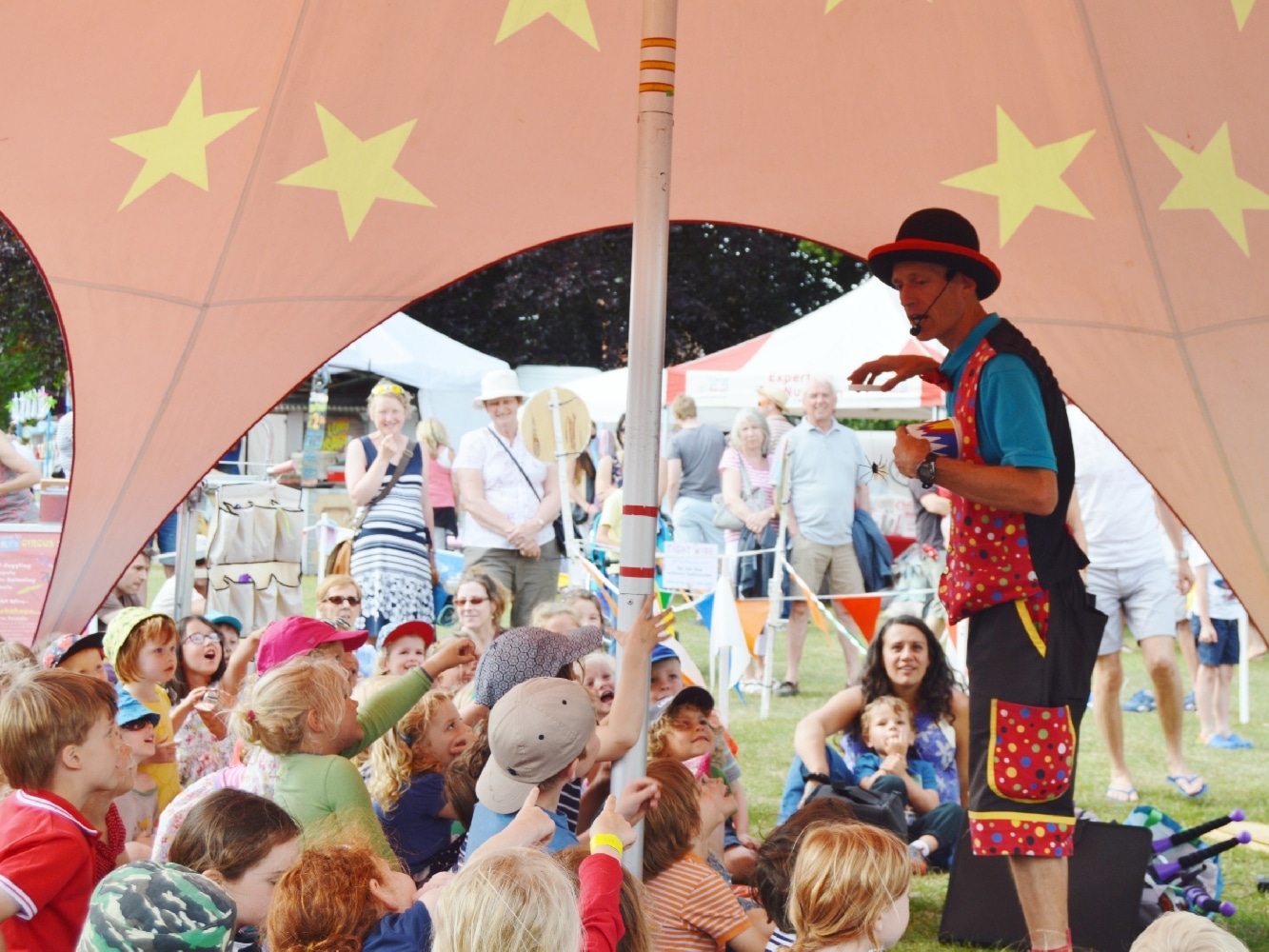 Hat Fair, the UK’s longest-running festival of Outdoor Arts, is back – and this year it will once again take over the city streets and green spaces of Winchester, which it is known for!

Held over the first weekend of July, this year Hat Fair runs from Friday 1 – Sunday 3 July and will invite audiences of all ages to watch bright and bold street theatre, music, dance, comedy and circus, performed by the very best local, regional, national and international acts, in front of the city’s landmarks, cafes and restaurants, shops and parks – turning the city in to a stage once more!

There will be two ways to enjoy Hat Fair. On the Friday and Saturday, the festival will be free, with all performances taking place across the city centre; while on the Sunday, audiences can opt for a more relaxed festival fun-day experience with a ticketed event at North Walls Recreation Ground (with exclusive brand-new shows, outdoor immersive games and gig theatre not featured elsewhere during the festival). But whichever way festival-goers choose to enjoy Hat Fair, they will not be disappointed by the full programme of performances suitable for all ages and interests.

Hat Fair will commence on the Friday with the Carnival, when hundreds of local school-children will parade through the city streets in colourful costumes and headdresses they have made in school, dancing to samba learnt in preparation. They will start at the Great Hall and after the procession, be greeted in Abbey Gardens by local community groups for a picnic. The parade will be followed by Autin Dance Theatre’s Eko, a 13ft Sea Giant puppet, that features in Out of the Deep Blue – a moving tale about our earth’s climate emergency, which the theatre group will perform on Friday afternoon. Eko will re-emerge to explore Winchester on Friday afternoon too.

On the Friday and Saturday Hat Fair will host the international premiere of, and the festival’s headline show, A Handful of Dreams by Fidget Feet – made possible with support from Culture Ireland. This is an awe-inspiring and heart-warming show with aerial and circus acts, live Irish traditional music and dance that invites audiences of all ages, cultures and backgrounds to embrace innocence and hope.

Hat Fair is a commissioning partner of Without Walls – a network of festivals that work with artists to bring outdoor arts to towns and cities across the UK – so this year’s line-up features a number of co-commissioned productions including, to name a few, Middle Child’s There Should Be Unicorns – a brand-new outdoor musical piece, incorporating hip hop, dance and theatre, about an 11-year-old Jasmine who plans to take on the bullies, villains and ideas that shape the world around her. Fatt Projects’ Big Gay Disco Bike will be on the move – so make sure to join cabaret superstar Fatt Butcher as the drag icon ‘in the making’ brings D-I-S-C-O back to the streets. DaDa X Black Gold Arts’ Made of Gold is a walkabout performance about golden goddesses who embark on an amazing adventure to defend their destiny – incorporating creative British Sign Language (BSL) and Audio Description. Plus, Hat Fair veterans Daryl Beeton and Mimbre bring Look Mum, No Hands! – a tender coming-of-age story about two friends who playfully test the boundaries to see what is possible. One of the characters uses a wheelchair, creating striking physical imagery.

Tara Theatre presents Final Farewell – a theatrical experience capturing the voices of seven individuals and a pug in six poignant stories about loved ones who were lost during the pandemic; while Theatre Temoin’s FLOOD includes ‘sound umbrellas’ (featuring voices and music), circus and acrobatics to tell the story of how our coastline and communities have become ‘seasick’.

Other shows include Dizzy O Dare’s Falconry Dismay. Head falconer Kevin Tickle leads a breathtaking display of majestic birds of prey, all with unique behaviours. Or Join Zum Zum’s giant Hippos and ask, are the humans disguised as hippos or are they hippos searching for themselves inside the humans?

Cat and Mouse Theatre recruit stars and crew from the street in Blockbuster Factory; while Bash Street Theatre’s The Cameraman features songs, music and silent comedy in a piece about an inept cameraman who becomes involved in the theft of the world’s largest diamond!

Avanti’s Full Circle draws a crowd through a series of odd actions, with strangers soon helping the performers with a series of tasks and one audience member facing consequences; Curious Company Theatre’s Department of Complaints wants to hear from grumbling audience members. Post a niggle on the board or fill out a form. While Wet Picnic’s Dinner Table is a crash course in decent dining and eating etiquette, surreal and fun with audience participation, food mess and dancing.

Once again Hat Fair will welcome back international street theatre performers or ‘Hatters’ to busk (or ‘hat’ – which is how the festival got its name). Including festival favourite Fraser Hooper, with a mesmeric mime show and complete disregard for his own safety; Felicity Footloose who lives in the 80s and just wants to dance and perform daredevil acrobats; Emillio Allessi with a comic juggling show; Daniel Gonclaves with a participatory clown show; and gentle magician, Jay Park – who tries to be slick but keeps making mistakes until the end of his show when he excites with impressive tricks! Plus, many more, as well as Hat Fair veterans Garaghty and Thom with Street Comedy – circus trickery, improv and comedy routines suitable for all ages.

The festival will also shine a light on local and emerging talent. On the Saturday, Parchment Street will host the Top Hat Competition when University of Winchester students perform to a panel of judges for the chance to return to the festival the next year as an official act. Last year there were two winners so this year DoDoDramatics are back with Queen of the East about Cleopatra’s rise in power, in Abbey Gardens; while Michelle Dabenett will appear on St John’s Almshouses lawns with Blanket Fort Babble about three cousins who build a blanket fort in the woods but wonder if they should have, once the sun goes down! Playmakers’ Youth Theatre groups – including members from school year 4 through to age 25 – have also been working on a number of shows for the festival, with local playwrights and performer Jon Hicks, who will be at Hat Fair with The Visionary – hilarious, ridiculous, mysterious street theatre where the audience never know what they are going to get.

Plus, there will be local talent aplenty performing across the city centre on the Friday and Saturday; and on the Music Stage on the Sunday. Including Americana, country and folk music from 5-piece band, Barefoot Soul; singing and street dance from Winchester-based Blue Apple, which supports performers with learning disabilities; songs and tales about the city’s past from time-travelling troubadour, Baldwyn Bard (performer Josh Vaatstra); panda beatboxing and life hacks like ‘potato mindfulness’ from ‘practitioners of Wellbeing Through Nonsense’, Panda-monium; a contemporary dance piece inspired by themes such as strength in the face of adversity by wheelchair dance group, Liberate Dance; plus choirs, ukuleles, international dance and much, much more.

There will also be mini golf; circus skills from children’s favourite Juggling Jake; and the return of Out of Bounds, with Knights of the Renowned Fable – recreating adventures with wizards, kings and dragons. Audiences will get another chance to immerse themselves in the giant colourful labyrinth of chambers, Colourscape, by Eye Music Trust; and see the world in a different way with optical mirror illusion, The Amazing Camera Obscura. Children will love to try a range of musical instruments at The Musication Station. Plus, there will be food, drink and gift stalls.

Hat Fair’s organisers hope that the public welcome its return to the city centre after Winchester fell silent over the festival weekend in July 2020 due to the pandemic; and after last year’s event took place, in its entirety, at North Walls Recreation Ground, in accordance with government guidelines.

Hat Fair Director, Andrew Loretto, said: ‘I can’t wait to bring Hat Fair back to the streets of Winchester city centre for the first time in three years. Last year’s version featured a restricted capacity out of necessity so it will be great to return in 2022 to what will hopefully be a full-fat festival in all its glory.

‘Let’s take to the streets once again on Friday and Saturday with a plethora of free, high quality professional and local community performances. Then buy your tickets for the very different Sunday offer where you can see unique performances and relax on our festival greenfield site.’

The full programme of shows, plus the option to buy tickets for the Sunday event, can now be viewed on the festival website hatfair.co.uk.