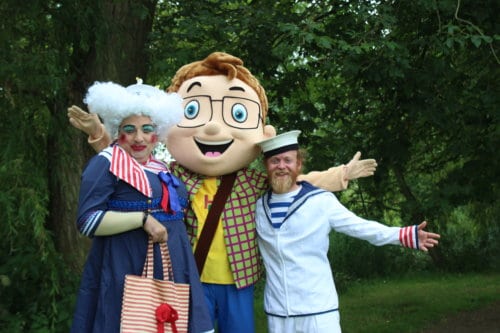 The free, three-day, annual event sees the streets and green spaces of the city filled with local and international street artists, musicians, dancers, singers, theatre companies, local performers and circus-inspired acts – and Harry was keen to see as much as possible!

He was sad that he missed out on being in the Carnival that kicked off the festival. He would have loved to have dressed up in a brightly coloured costume, like the other local school children, and danced and sung from the Great Hall to Abbey Gardens, but he certainly made up for it by having his picture taken in front of Thingumajig Theatre’s towering and beautiful Ghost Caribou – two giant caribou puppets – that had featured in the Carnival and were returning that evening, lit up, for a walkabout performance.

He also posed for a photo with the colourful cast of Tickertape Parade’s Fantabulosa – a show that teaches children and adults to love who they are. He took a selfie in Colourscape – a labyrinth of coloured chambers filled with music and dance – and enjoyed the Amazing Camera Obscura.

If that wasn’t all, Harry enjoyed performances from some of the Hatters at the festival. Hat Fair is of course named after the Hatters – or buskers, who collect donations in a hat from their audience after their show. Harry saw US dancer Bboy illwill, extreme hula hooper Maple Staplegun, and festival regulars, singing acrobats Barada Street and funny men Street Comedy.

Not only that he bumped into two of this year’s Theatre Royal Winchester pantomime cast – Dolly Dumpling and Dick Whittington himself! He liked that the most and felt like a celebrity!

He loved learning about all the fun things going on over the weekend, and walking around the city, seeing the local landmarks. But most of all he loved being entertained by the many performers, and he cannot wait to return to Hat Fair 2020.