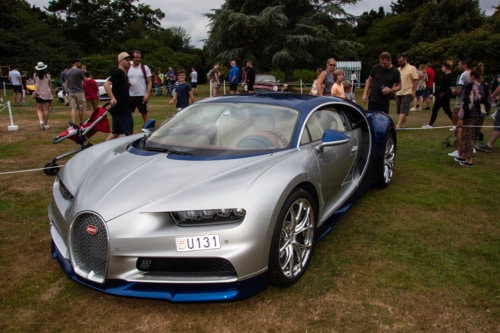 As Beaulieu’s most successful show in 2019 – with almost 2,000 extra event-goers bringing this year’s total to 16,800 – the A-Plan Insurance-sponsored event beat off competition from the awards’ record number of entries. Competing against three other finalists in the Tourism Event/ Festival of the Year category, the packed two-day event in the grounds of the National Motor Museum was judged to be a highlight for any visitor to the region and a must-see for families and motoring enthusiasts alike.

At the awards ceremony at The Grand in Brighton on Tuesday 10 th December, Beaulieu Events Manager Judith Maddox and Commercial Director Steve Munn were presented with the highly-prized trophy by renowned travel journalist and broadcaster Simon Calder. Presenting the award, Simon said that the judges had described Beaulieu Supercar Weekend as simply “a fantastic day out”! Judith Maddox said: “Beaulieu Supercar Weekend has grown significantly over recent years,
with lots of new features which make it so successful. We have been proud to receive this gold award and to be recognised as a shining example of excellence in tourism. We look forward to celebrating the event’s tenth year and completing its first decade in August 2020.”

Beaulieu Supercar Weekend is one of the stars of Beaulieu’s packed calendar of motoring events, celebrating some of the greatest performance cars ever built with demonstration runs, sound-offs, special displays and features in the Beaulieu parkland. Next year’s event will take place on August 8 th and 9 th . For more information on Beaulieu’s 2020 events
calendar and tickets see www.beaulieu.co.uk/events.

The Beautiful South Awards are the most coveted accolades for the tourism industry in the region. The awards celebrate the very best for all types of tourism businesses including B&amp;Bs, hotels, holiday parks and visitor attractions, as well as recognising businesses that have gone the extra mile for accessibility, sustainability and great customer service. The award judges take many factors into account, including visitor feedback, reviews, online coverage and value for money.

Tourism South East Chairman Mark Smith said: “The Beautiful South Awards are a reminder that tourism businesses in the South East are a match for any in the country and some are truly world class. This year the overall standard of entries was higher than ever, making it extremely tough for the judges.”