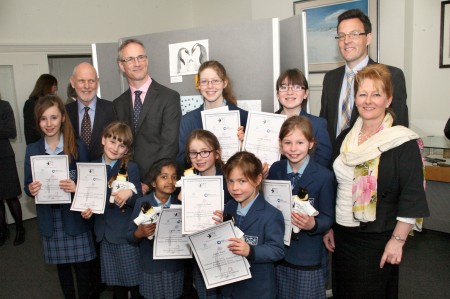 Participating in the celebrations marking the arrival of an Emperor penguin and chick at Gilbert White’s House in Selborne, pupils from Alton Convent School took part in an art and naming competition for the new arrivals as part of the on-going partnership with the museum. The eye-catching artwork will remain on display in the Antarctic Galleries for visitors to enjoy throughout the Easter holidays.

Professor Paul Rodhouse, Emeritus Fellow British Antarctic Survey (BAS), a Member of the Cambridge Drawing Society, judged the art competition and Mike Dunn, Higher Predator Ecologist BAS judged the penguin naming competition. The winners were delighted to receive their certificates and prizes from the Countess of Portsmouth at the official unveiling held on March 17th.

Pictured left to right with their certificates:

The competition was launched during the school’s recent ‘Pole-to-Pole’ theme week, where pupils from 4 to 11 years old investigated the science, geography and history behind polar exploration. Two members of the Gilbert White Field Study Centre Education Team led a whole day of Antarctic themed outreach activities at the school. The programme also included a presentation from Alton Convent’s Headmaster, Mr Graham Maher. Mr Maher will be heading to the Arctic in April. This endeavour forms part of a series of fundraising challenges for the school’s 75th Anniversary Appeal to completely refit their science laboratories.

The special partnership between the school and the museum has continued to flourish since its establishment four years ago. The relationship reflects a shared commitment to inspire the next generation of scientists, naturalists and artists, through innovative and memorable educational activities. The sixth formers have also benefitted from holistic commercial experience during their annual work placement, where they are empowered to design, promote and run the museum’s main summer family event – held during the first weekend of August – Gilbert’s Games & Country Fair. Both the school and the museum are committed to further growing and developing the partnership.

Headmaster Graham Maher commented, ‘We are delighted to be working with Miriam Tong, General Manager and the team from Gilbert White’s House. Our values and objectives are in synergy in promoting the myriad of opportunities created by the pursuit of science and art. We look forward to our continued partnership, and are excited about the possibilities.’