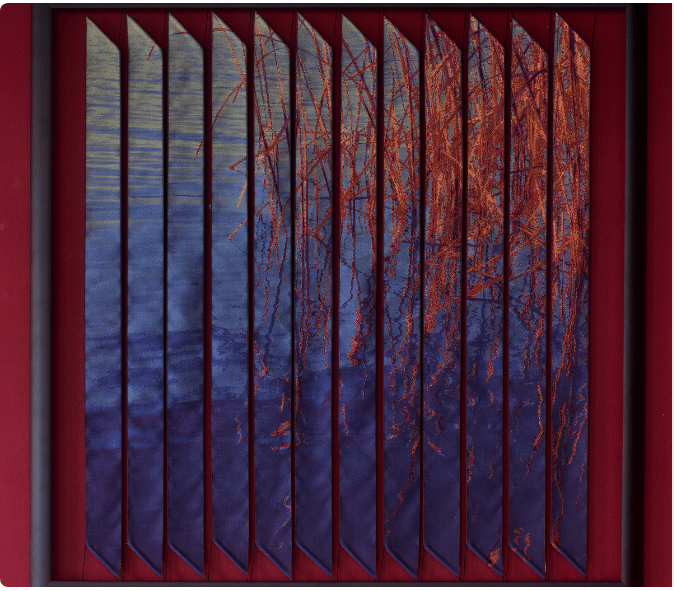 ‘Works in Silk’, an exhibition by silk ribbon weaver Robert Ely, who studied hand weaving at West Surrey College of Art and Design. In 1995 his connection with the Whitchurch Silk Mill began as he completed a short internship here to study weaving shed operations. In 1996 he began to design and weave jacquard silk ribbons for his new studio, called Papilionaceous. At first, Robert intended to weave silk for bow ties, which in French are ‘papillon’ – the butterfly – and so Papilionaceous, a word meaning butterfly-like, was born. The studio relocated to Dartmouth, Devon in 2001.

Robert is now able to devote more time to the artistic side of his work, designing and weaving wall pieces assembled from multiple woven silk ribbons and inspired by local Devon land and seascapes. The ribbons are woven on a narrow fabric jacquard loom which weaves at a width of 4cm. As with any other form of weaving, the appearance of the finished piece is a combination of weave structure and yarn colour. The jacquard mechanism allows greater control over where the structures and colours are used.

Robert starts with an idea of what the overall layout of the piece will be, and then designs and tries out small areas in isolation before weaving increasingly longer lengths of ribbon to see how each strip works with its neighbours. The final process is to weave a complete length of each ribbon which can then be mounted and framed. Through this process the finished piece evolves over a considerable length of time.

This is Robert’s first solo gallery exhibition outside Devon and brings together weaving from all areas of his work. Visitors will see one-off and limited-edition wall panels through to woven silk costume ribbons used for film and television, including the BBC’s ‘Poldark’.