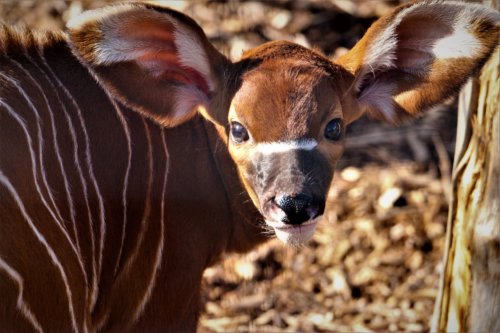 A critically endangered mountain bongo has been born at Marwell Zoo, in Hampshire.

The female calf was born on 29 September to first-time parents, Kailina and Ituri. Keepers have named the calf Ada, which means first born daughter and report she’s “very strong and lively” and “Kailina is being a brilliant and attentive mum.” The stunning striped infant has a bright chestnut coat with a long tufted mane from her shoulders to her rump and huge oversized ears.

Marwell’s Conservation Biologist, Dr Tania Gilbert, says; “The last time we celebrated the birth of a mountain bongo here was over ten years ago, so this is really special, not just for us as a zoo, but for the conservation of the species as a whole. “The mountain bongo is on the brink of extinction, with fewer than 100 in the wild. That’s far fewer than the Sumatran Orangutan, so this species really is incredibly rare.” Mountain bongos are currently only found in four separate populations in Kenya, where they live in montane forests in the highlands. Threats include hunting, loss of habitat due to illegal logging and diseases transmitted from domestic cattle.

Marwell Wildlife, which own and operate Marwell Zoo, is working with Masters of Research students looking at both genetic and husbandry factors that influence birth success. Dr Gilbert continues; “If we have a better understanding of reproductive success, then we have a better chance of improving birth rates and long-term population persistence.”

Other successful births from Marwell Zoo this year include an endangered okapi, an endangered Przewalski’s horse, two scimitar-horned oryx, which are extinct in the wild, two lesser kudu, three Greater flamingos, a Plains zebra and most recently an endangered Grevy’s zebra.

For more information and to visit Marwell Zoo, visit www.marwell.org.uk