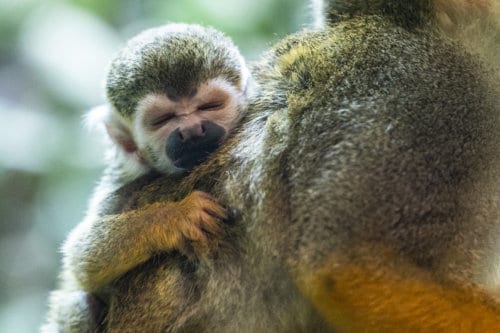 There is yet another good reason to visit Marwell Zoo, in Hampshire, this autumn, as the wildlife park celebrates a pair of very cheeky little Guianan squirrel monkeys, born earlier this month.

The two infants, born on 7 and 8 October, are the first squirrel monkey babies born at Marwell Zoo for 15 years.

The mothers are Gwyneth, age six, and Reyes, age four, and the father is Max, a 13-year-old, who arrived from Cotswold Wildlife Park in April 2019.

The news comes shortly after the zoo welcomed the arrival of an endangered Grevy’s zebra foal and critically endangered mountain bongo calf in September.

Neither of the squirrel monkey infants have been sexed yet, as keepers leave the mothers and babies to bond and socialise with the rest of the group.

Jamie Wharton, Primates & Small Mammals Team Leader at Marwell Wildlife, said: “As their name suggests, squirrel monkeys are small primates, and these infants are tiny. They weigh around a hundred grams, which is about the same as a small apple, and the young cling to their mother’s front or back, so you need to look carefully to spot them.

“As the babies grow older and gain more confidence, they will play and interact with each other loads, so that will be great to see.”

The monkeys mate during the ‘dry season’ within a two-month period, and all pregnant females within a group tend to give birth within a week of each other.

Unlike other monkeys, squirrel monkeys get about by jumping rather than swinging, walking or clambering. They use their powerful legs to leap and their long tails are used for balance only.

The Guianan squirrel monkeys and infants can be found in Marwell’s Life Among the Trees exhibit.

For more information and to visit Marwell Zoo, visit www.marwell.org.uk