News > The Burning of the Wickerman at Butser Ancient Farm 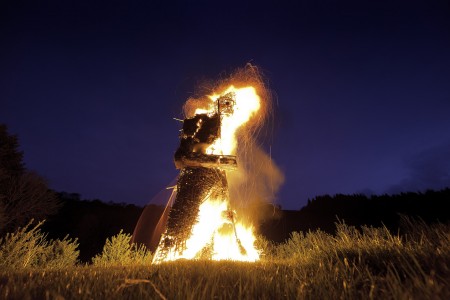 THE drumming stars of the 2012 Olympic opening ceremony are among the major attractions at Butser Ancient Farm’s popular Beltain Festival on Saturday (May 3rd).

Around 30 performers from Pandemonium Drummers will play during the festival in the run up to the spectacular burning of the Wicker Man as night falls. The annual event at the archaeological research farm and visitor attraction near Chalton marks the ancient Celtic festival to herald the start of summer. The drummers featured at the heart of the Pandemonium scene at the London Olympics opening ceremony marking the moment in British history when the industrial revolution began. While chimneys emerged from the earth destroying the peace and quiet of country life, 1000 volunteer drummers supported a dramatic soundtrack. It was one of the biggest live set changes in history and ended with the five Olympic rings on fire, cast from the iron and steel created by the industrial workers. The drummers also appeared at the closing ceremony as athletes’ marshals in their now iconic blue lightbulb bowler hat costumes.

Festival organiser Fergus Milton said: “The drummers will re-enact part of their Olympic performance at Beltain. “This will be a really unique opportunity for people to see them again.” The drummers are just part of a major programme of entertainment at the festival. Musical entertainment is lead by popular Irish folk band Feckless who aim to get everyone up and dancing. They are supported by up and coming singer song writer Aimee Mackenzie. Early medieval historical group Weorod will re-enact the lives of 6th and 7th century settlers and visitors can rub shoulders with the farm’s own Roman legionnaires. Children are well catered for at the popular family event with craft activities run by the Woodcraft Folk and head wreath making from plant materials with staff from the Sustainability Centre at East Meon.

There will be story telling in the Celtic roundhouse and Ancient Music are back again with a range of historical instruments for visitors to try. And at some point during the event they’ll be roaming the site with the musical minstrel and his ‘oss! Crafts people – including wood workers and a bronze caster – will demonstrate their expertise and their wares and visitors can get up close and personal with a variety of birds of prey. As night falls visitors can also watch the stars with locally-based Hants Astro, one of the biggest astronomy groups in the UK. The event’s climax is the spectacular lighting and burning of the Wicker Man after dark.

Tickets, £13 adults £7 children before Friday 3rd May 3pm, after this date tickets will be £15 adults and £10 children. Tickets are available at Butser Ancient Farm or with debit card over the phone 02392598838.