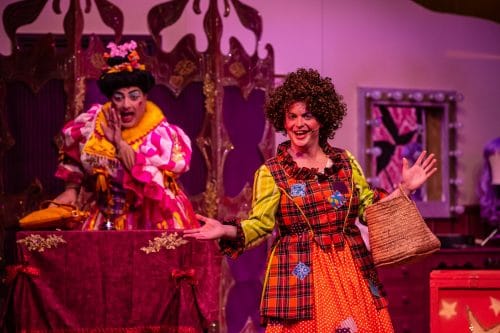 Play to the Crowd, the charity that runs Theatre Royal Winchester, has released an ‘On Demand’ recording of its recent Christmas show Four Dames in Search of a Panto. It  was recorded on Christmas Eve – the last show on before coronavirus restrictions cut short the production run.

Four Dames in Search of a Panto features panto set pieces (including the much loved Twelve Days of Christmas), hilarious gags (plus some very corny ones too!), original songs and familiar faces to Winchester audiences. The panto-styled show was created by the same team behind the theatre’s hugely successful pantomimes – Written and directed by James Barry with music by composer Simon Slater.

The cast of four were all familiar to Winchester pantomime audiences: Julian Eardley returned as one of the Dames – his 11 th outing as a Dame in the city. Julian was joined by his comic side-kick from the last three pantomimes– Ed Thorpe. Ed played the title role in Dick Whittington, as well as Wally in Beauty and the Beast and Smee in Peter Pan – for which he was nominated in the national Great British Pantomime Awards in the Best Songsheet category.

Libby Gore, who played Fairy Bow Belles in Dick Whittington, played the third Dame. Tom Attwood who, for the last three years, has been the resident Musical Director playing the keyboard for the pantomimes, went back to his roots as an actor, to play the fourth Dame.

The British Theatre Guide’s review of the show comments ‘Writer and composer duo James Barry and Simon Slater have hit upon the perfect formula for a panto-inspired show that not only celebrates the genre, but teaches its traditions and supplies the staple characters we all love.’

The review continues ‘Despite the many challenges and ever-changing restrictions, Winchester’s pantomime is a triumph over all adversity and something the venue and city alike should be most proud of.’

The latest lockdown has forced the theatre to close once again until at least March. The theatre asks ticket holders not to contact them but wait until they are contacted.

Four Dames in Search of a Panto is available to view on demand for £9.99 for 72 hours. For more information and to book, visit theatreroyalwinchester.co.uk