Fort Nelson – one of the great Palmerston forts bui 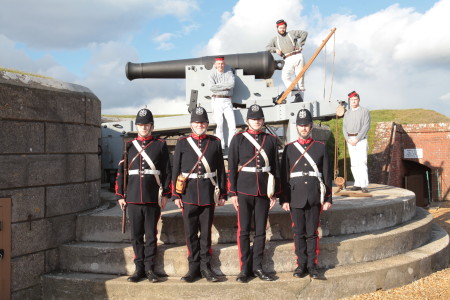 lt to protect the city of Portsmouth – will ring to the sound of a mighty Victorian gun next Sunday (June 22).

Uniformed members of the Portsdown Artillery Volunteers will fire a Rifled Muzzle-Loading (RML) 64-pounder gun at 11.30am, 1pm and 3pm from a traversing platform, in the latest of Royal Armouries’ free feature gun firings.

With an extreme range of 4,000 yards, this gun was converted to its current format in 1875 in the Royal Gun Factory at the Royal Arsenal, Woolwich.

The design modification allowed the re-use of the vast remaining stocks of obsolete British smooth-bore guns. This enabled the introduction of new, more accurate and efficient RML weapons into British service in the 1860s.

Royal Armouries’ Keeper of Artillery Nicholas Hall, explained, “Captain W Palliser proposed a method in 1863 of rifling old cast-iron guns [32 pounders and 8-inch shell guns] by boring out the barrel and inserting a coiled wrought-iron liner, which was then rifled with three grooves, based on the French system.

“The gun fired a projectile with studs along its sides that fitted into the rifling grooves and this system allowed the shell to be loaded from the muzzle. Shrapnel or case shot could also be used against enemy troops at short range.

“This is a great demonstration to watch as the high parapet gives protection to the detachment but requires a rather complicated loading drill, so it will form a highlight for anyone planning to visit the Fort next weekend.”

Fort operations manager Nigel Hosier added, “The demonstration will be followed by a chance for visitors to inspect the gun, and to ask the volunteer gunners for more information, and questions. Museum admission and parking are absolutely free and Fort Nelson provides a fascinating day out for all the family.”

Standing high on Portsdown Hill near Fareham, Fort Nelson showcases one of the world’s finest collections of artillery and cannon, from across the ages and from all corners of the globe.

In 2011, this unique heritage attraction underwent a £3.5m redevelopment to create a museum for the 21st century, supported by a grant from the Heritage Lottery Fund, complete with new galleries, state-of-the-art education centre and visitor facilities.